Welcome to Cover Girls AtoZ Challenge!!
This year, like in years past, we are posting about which book covers we fancy, and our opinions about them.
Enjoy!! 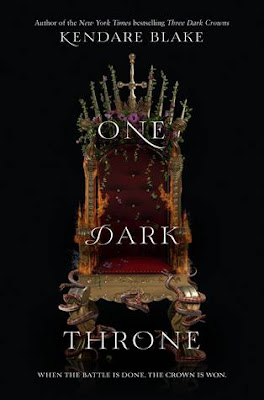 The battle for the Crown has begun, but which of the three sisters will prevail?

With the unforgettable events of the Quickening behind them and the Ascension Year underway, all bets are off. Katharine, once the weak and feeble sister, is stronger than ever before. Arsinoe, after discovering the truth about her powers, must figure out how to make her secret talent work in her favor without anyone finding out. And Mirabella, once thought to be the strongest sister of all and the certain Queen Crowned, faces attacks like never before—ones that put those around her in danger she can’t seem to prevent.

In this enthralling sequel to Kendare Blake’s New York Times bestselling Three Dark Crowns, Fennbirn’s deadliest queens must face the one thing standing in their way of the crown: each other.

Dani – This cover is a great addition to the first novel. And, since I read Three Dark Crowns, this cover is very representative of what’s to come.
Jax - This throne is inviting in all its majestic glory with the cushy seat, pretty roses, and ivy growing throughout... but with a closer look, it's a chair you wouldn't want to sit in surrounded by snakes and flames.

Thanks for stopping by! Come back tomorrow to find out what the next cool cover is.

Email ThisBlogThis!Share to TwitterShare to FacebookShare to Pinterest
Labels: A to Z Blogging Challenge, Kendare Blake, One Dark Throne