V is for Veracity 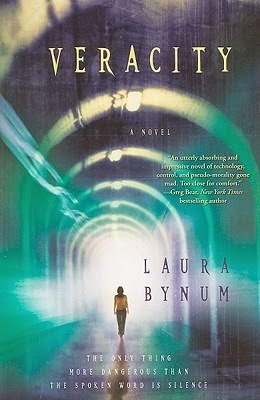 
Hardcover, 376 pages
Published January 5th 2010 by Pocket
Harper Adams was six years old in 2012 when an act of viral terrorism wiped out one-half of the country's population. Out of the ashes rose a new government, the Confederation of the Willing, dedicated to maintaining order at any cost. The populace is controlled via government-sanctioned sex and drugs, a brutal police force known as the Blue Coats, and a device called the slate, a mandatory implant that monitors every word a person speaks. To utter a Red-Listed, forbidden word is to risk physical punishment or even death.

But there are those who resist. Guided by the fabled "Book of Noah," they are determined to shake the people from their apathy and ignorance, and are prepared to start a war in the name of freedom. The newest member of this resistance is Harper -- a woman driven by memories of a daughter lost, a daughter whose very name was erased by the Red List. And she possesses a power that could make her the underground warriors' ultimate weapon -- or the instrument of their destruction.

In the tradition of Margaret Atwood's The Handmaid's Tale, Laura Bynum has written an astonishing debut novel about a chilling, all-too-plausible future in which speech is a weapon and security comes at the highest price of all.

Jax- If I were the girl on this cover, I don't know if I'd walk down that tunnel or not. Part of me wants to scream, "Go the other way!" while the other part wants a peek at where this path leads.

Dani- Exactly! I want to know more but then I don’t.