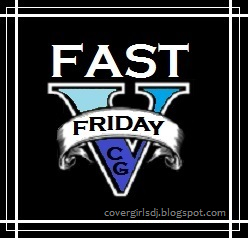 Fast Five Friday is back after the April A to Z Blogging Challenge! FFF is a weekly blog hop created here at Cover Girls. Its purpose is to connect with writers, readers, viewers, and bloggers. With that aim in mind, we'd love for you to join us!
We're suckers for lists, so we thought it'd be cool to do a weekly blog hop focusing on lists.
You can pick and choose which topics you'd like to participate in. Then, after you post it on your blog, please include the link to your Fast Five Friday in the comments section of our FFF post each week, so others can stop by your blog!


Jax ~ "She says nothing at all, but simply stares upward into the dark sky and watches, with sad eyes, the slow dance of the infinite stars." Neil Gaiman's Stardust

Jax ~ "You are the answer to every prayer I've offered. You are a song, a dream, a whisper, and I don't know how I could have lived without you for as long as I have." Nicholas Sparks' The Notebook

Jax ~ "That is the second time you have spoken out of turn, Miss Granger. Tell me, are you incapable of restraining yourself, or do you take pride in being an insufferable know-it-all?" J.K. Rowling's Prisoner of Azkaban

Dani ~ “Have you ever asked yourself, do monsters make war, or does war make monsters?”


Dani ~ "I pulled perhaps an inch of this worm—pink and gray, streaked, like something infected—out of the hole in my foot, and then felt it stop. I could feel it, inside my flesh, making itself rigid, unpullable. I was not scared by this. It was obviously just something that happened to people, like when the neighbor's cat, Misty, had worms."